Skip to content
Search
Close
Back in October I wrote a guest blog post for Glyn Mottishead’s online and mobile journalism blog for his students, about how site searches could be a useful tool for journalists, I found the draft post again in my Google Docs the other day and thought, since some things had moved on since that was written, it merited a repost.
So, with apologies to Glyn for repeating myself, here’s an updated version:


Seek, and sometimes ye shall find things that you weren’t actually looking for in the first place.
Take crowdsourcing, as an example; you start out with an idea, share it across online networks, and wait… and sometimes what comes back bears little resemblance to what you originally conceived. Sometimes it is a vast improvement.

We’ve been paying a lot more attention to Search in the Post and Echo newsroom recently and it’s paying off.
Twice a day, this drops into the inbox of heads of department in Editorial… 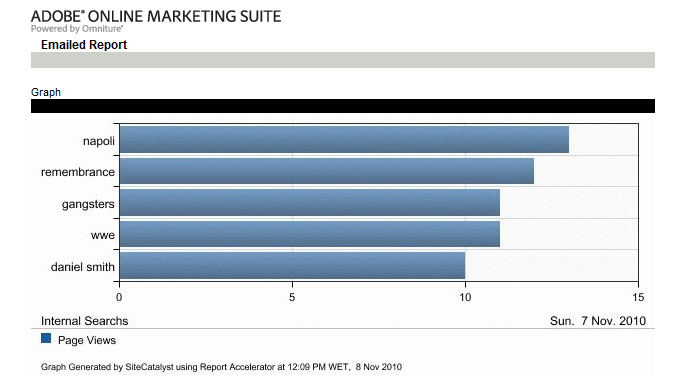 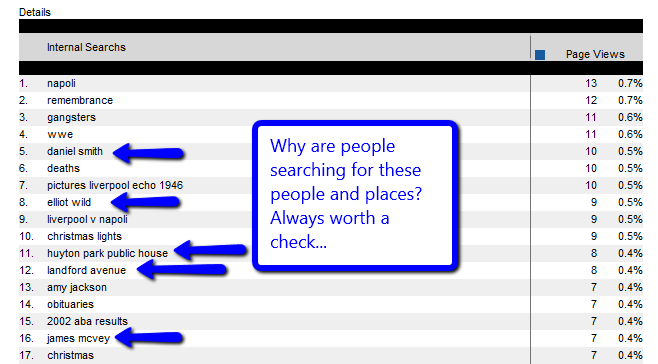 It’s a self-updating dashboard created in Omniture Analytics, and it shows the sorts of internal site searches people are running. For example,  James McVey was a lad who died in tragic circumstances about three weeks ago, but his name still shows up in searches every day – in fact, last Thursday James was the most searched for subject on the site.  Daniel Smith is a gangster and these searched-for articles are no doubt being read (slowly, with brows furrowed by concentration) by Liverpool’s criminal underworld, while little Elliot Wild is the subject of a high-profile bone marrow campaign.

But what’s been happening in Landford Avenue? Or at Huyton Park pub? It would be well worth be checking out with local sources, just to see if the jungle drums have been beating about an incident; audiences will often come to our site to read the official take on something they already know the background on. And to comment, of course.
Note of caution: When we first introduced this initiative the press office at Merseyside Police were naturally confused by a sudden surge in reporters ringing up, apropos of nothing much, asking “Anything been going on at Accacia Avenue, Anywhere?”. We explained the background and also reined back on that sort of random approach – if you’re a press officer you tend to need a bit more to go on than a searched-for address.

So in-site search give us a (sometimes vague) nod as to where a news story might be brewing, and it can definitely show where readers’ interests lie – we continued to run James McVey stories because the audience has shown an appetite for that, and listening to your audience is key.

But these searches can also give us the kind of information that you would wear out a lot of shoe leather trying to get, often without success.
When someone is killed in violent circumstances on Merseyside – something that seems to happen with depressing regularity – there is a strong chance that the in-site search will, within hours, start showing multiple searches for a specific name. Twice we’ve run these names by official sources and got confirmation that it is indeed the deceased.
If the death involves a gun and someone who is – as the phrase goes – known to police (aka a gangster) then you can practically guarantee their name will crop up in a search before anything official has been released. The most recent example happened shortly before Christmas – two teenagers died in tragic circumstances during a car crash and their names showed up in the top 10 most searched-for terms within the hour, and remained there for several days.

From a digital team point of view, the daily site search round-ups have also visibly demonstrated – with proven results – the opportunities inherent in online journalism to those who are more print-focused in their jobs.
It can be easy for a newsroom to view the website as a separate entity, not as part of the platforms we use to reach audiences. Print is such a behemoth, with its deadlines, and its multiple pages that demand filling, that I understand how it eclipses digital in some journalists minds, even if I don’t like it. But these site searches reinforce the usefulness of the web, underline how readers are using it, how they don’t differentiate between paper and screen when it comes to finding out information – they just want it. And that has helped achieve a little culture shift in Editorial.

In-site search tells us so much, but it’s equally interesting to know where your non-audience is getting their information. We use Hitwise and it is a constant source of fascinating (and sometimes dispiriting) information about our un-users.

But knowing where you aren’t hitting audiences is vital; it helps us spot where our gaps are and, when appropriate, take steps editorially to address that. Take showbiz – the Echo score on Hitwise was low in March 2009 with most searches by Liverpool people for Hollyoaks (made by Liverpool company Lime, filmed in the city) going to Digital Spy. Which was crazy because we actually do a lot with Hollyoaks, and have a good relationship with them. So, showbiz coverage was upped, more galleries, better SEO, and we improved our rankings. Not an earth-shattering topic, but a small victory nonetheless. Equally, from a Advertising department point-of-view, knowing that a large proportion of people in our circulation area are searching for – to take a real example – jobs in the NHS in Liverpool – could help inform commercial campaigns.

So, search is something I’m particularly interested in at the moment – not just in-site but also Twitter Search* using the advance search features. Useful when looking for local tweets on specific topics/people (although if I do Liverpool searches it takes time to sort out the zillions of football-linked tweets from news ones). TwitterSearch also gave us a fairly powerful assist when a suspected gangster was shot in Liverpool just before Christmas. We had a possible name, but nothing confirmed, but a refined area Twitter search turned up people tweeting RIPs and calling the victim by his first name. Not concrete enough that you could print initially, but it gave us a good steer that we were on the right track, and also meant we could tweet people asking them for comments.

Most recently I’ve been using it to gauge how people feel about Scouse singer Rebecca Ferguson on XFactor, simply by ticking the positive/negative box on the advanced search. Turns out she’s pretty much universally loved, if you fancy a punt at Ladbrookes…

With regards to Rebecca Ferguson, the results eventually showed she was indeed worth a punt if you were putting your money on the X Factor final two. Just goes to show what a powerful tool search can be.

2 thoughts on “Using search tools to inform news-gathering: Some data and examples”