The issue of tweeting in the council chamber has caused some debate lately, and I’m happy to hold my hand up as someone who helped the discussions along.
I’ve also been ridiculously busy at work, and so there hasn’t been much time to blog about local authorities and their varying views on anyone – press, public, councillor, officer – tweeting during the business end of proceedings.

To recap, the Daily Post* sent a reporter to cover a budget meeting at Wrexham Council and it became apparent that a Twitter rule – in place for more than a year but unenforced, in our experience – would prevent real time reporting, and thus impact on our rolling news liveblog.

“Proceedings at meetings may not be photographed, videoed, sound recorded or transmitted in any way outside the meeting without prior permission of the chair”.

I’ve covered council meetings since I was a trainee reporter. I have watched (genuine list alert) snoozing councillors reflex-vote, tantrums worthy of two-year-olds, recommendations voted through because the reporter sat next to me called out “move progress!” and a mayor utter the warning: “Allegations have been made about me, and if I find out who those alligators are…”
I’ve watched councillors make the most moving, impassioned pleas on behalf of their electorate, block economically-sound but culturally-wrong recommendations, make principled stands against cutbacks or planning outrages, and conduct cut-and-thrust debates that made a democratic difference.

None of the above – good or bad – needs to be reported retrospectively. Google ‘council chamber live stream‘ and see all the authorities who let the electorate watch the democratic process as it happens
Wifi, Ustream and a will to make it happen – that’s all our councils need to make a significant contribution to the transparent, open government.
Being more open means more scrutiny, and potentially more criticism, but it also means more feedback, interaction and opportunity to talk to people.
I don’t know why some councils embrace opportunities for transparency and others shy away from it. The subsequent fallout is never edifying – at best, it means the kind of nonsense the Daily Post is trying to negotiate a path through, at worst, well, all sense of perspective is lost.

Anyway, there was quite a lot of coverage, not least in the Post, and we’ve got a Right to Tweet campaign running now that is calling for consistency across public bodies, rather than ad hoc interpretation of constitution rules… 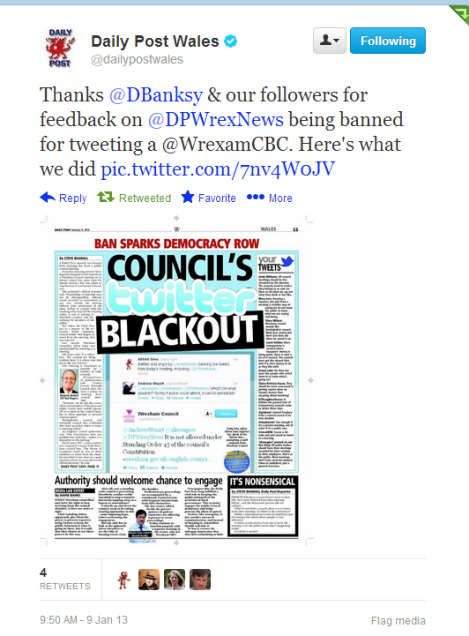 The Twitter ban incident (hashtagged as #twitterban but never to be referred to as #Twittergate) was covered in various media; among the articles were these here and here and here.

We even made the chief executive’s weekly email to staff (instantly leaked to the Press, of course):

[Twitter policy] can of course change in time as the Council further embraces technology, it doesn’t however, change as a knee jerk reaction to an editor who it appears only communicates with her readers via “twitter”.

The annoying part of that comms is, of course, the “twitter” bit. It’s a PROPER NOUN, for heaven’s sake, and don’t get me started on the quote marks…

I don’t seek out Twitter spats but I do feel strongly that if reporters and the public can use mobile devices to transmit information from court, there is no reason why they should seem permission to do so from public meetings.

Guidelines can be useful (maybe ‘switch off your phone’s volume’ or ‘ensure your behaviour doesn’t distract others’) but if the Attorney General doesn’t think the decision rests with his judges, then why should it rest with committee chairmen?

So, it’s an issue we aren’t letting subside – there’s a Daily Post campaign underway now as a result of us being refused tweeting rights during one council meeting – and the problem is spreading.
Louth Leader reporter Sam Kinnaird was thwarted in a bit to amend Louth town council’s standing orders to allow live tweeting, this week and tweeted that fact.
Two councillors backed it out of the whole full council; I see from the report the Mayor took the view that journalists should ‘have the courtesy to do it from the foyer’.
Quite how the dignity of the chamber is offended by someone quietly sending texts from a mobile phone escapes me.
In other Lincolnshire news, Boston Borough Council has also banned tweeting of its full council meeting today.
The Boston Standard report says

The borough authority currently only permits people to use Twitter during cabinet meetings and says its constitution will have to be changed to allow the social media site to be used to provide live updates from other meeetings.

Constitution, You’ll find it in the dictionary under S for Smokescreen.

Twitter is viewed as an appropriate communications tool by the House of Commons – possibly not a bastion of courtesy but certainly the seat of democracy, and tweetin’ since 2011 – and at the Senedd.
Welsh Secretary Dvaid Jones believes in it, Obama couldn’t wait to tell the world he’s secured four more years…
I just wish our locally elected representatives would try to catch up.

* Yes it’s a personal blog, but work inevitably bleeds into it sometimes. Like it says here, these ramblings are not the opinions of Trinity Mirror.

2 thoughts on “Why does live tweeting put councils in a spin?”